Artist Easel to TV Stand ‘Before & After’

Thank you so much!

You might remember waaaaay back about this time last year I posted in excitement about wanting to turn an artist easel into a TV stand. This was inspired by Vicente Wolf’s very creative idea, and if you missed my post you can catch up on it here. And then in House & Home’s June issue this year, an art easel turned TV stand was a featured DIY project!

This was exactly the push I needed to get back on track and tackle my year-in-waiting project!

Here’s what the easel looked like in its ‘before’ state. 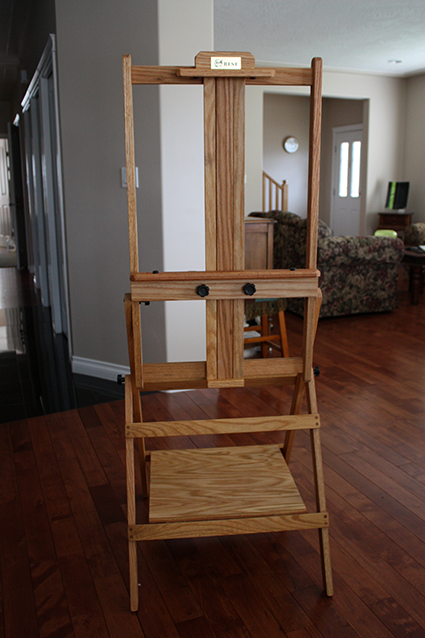 Notice there is just one shelf.

There was a concern that the TV would be too top-heavy for the stand once it was mounted, making it tip forward. A test-run proved this stand to be a lot sturdier than you would think, and with the added weight of the audio equipment on the bottom, it wasn’t going anywhere.

Here’s the TV console we were replacing along with all the audio equipment that would have to make the move. I forgot to take a true ‘before’ of it, so you’ll notice the TV is missing! 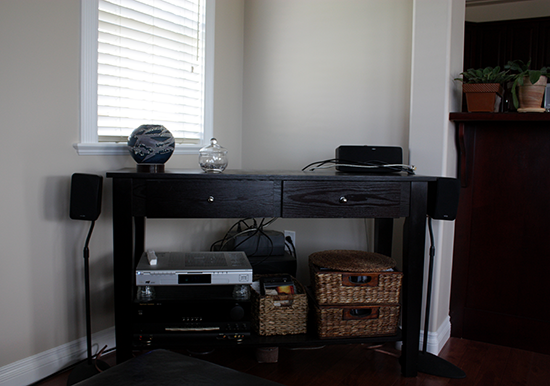 Without getting too lost in the details of this project, one of the things we did was add two more shelves to accommodate our equipment. 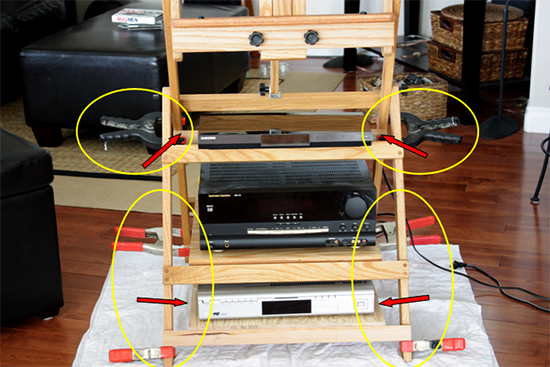 I had my heart set on painting the stand black, because I wanted the equipment to blend in. I opted to brush rather than spray the stand, and oh boy, what a chore that was! Just the sanding and taping was more than I bargained for! You see, I had to sand off a clear coat finish, and then tape all the knobs and exposed hardware. And this stand has a lot of grooves, not to mention a bunch of knobs, back and front, as well as ample hardware! 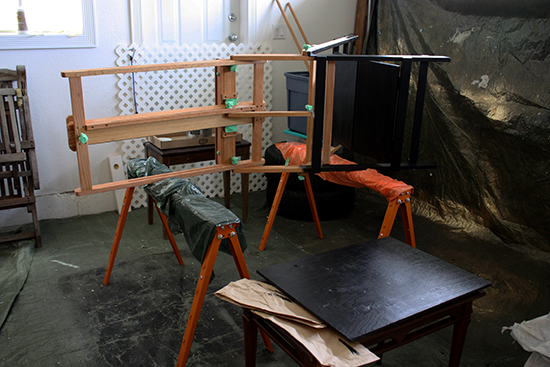 I used CIL’s low VOC, low odour DUO paint (Dark Secret, DL51 in semi-gloss), so was spared the priming. I haven’t used CIL’s 2-in-1 paint before, and was curious about its coverage. In the end the stand got two coats, and needed some touch-ups just where the frame was adjusted once the TV was mounted. The frame was tedious to adjust, which is why I didn’t mess with it when I was painting. 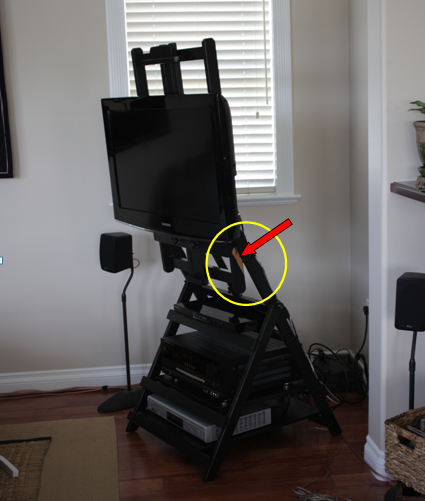 Next hubs drilled the frame so he could mount our center speaker for the surround sound right in the center of the stand. Makes sense, right? 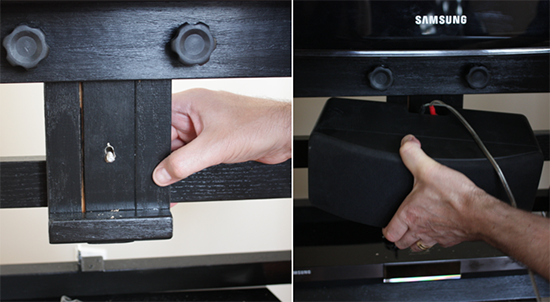 The TV, by the way, was mounted with steel strapping. 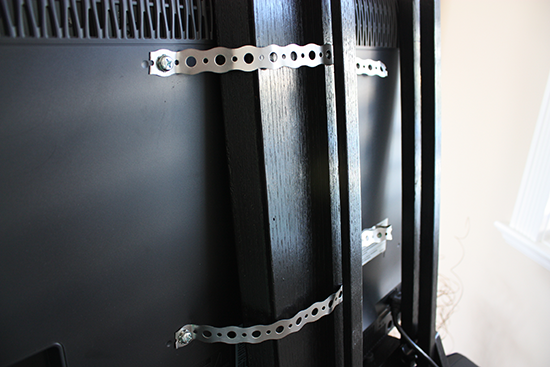 We used the TV’s pre-existing screw holes meant for a wall-mount bracket to attach the strapping, and wrapped it snugly over the back rest of the easel.

At first, I wasn’t too sure if I liked the outcome. 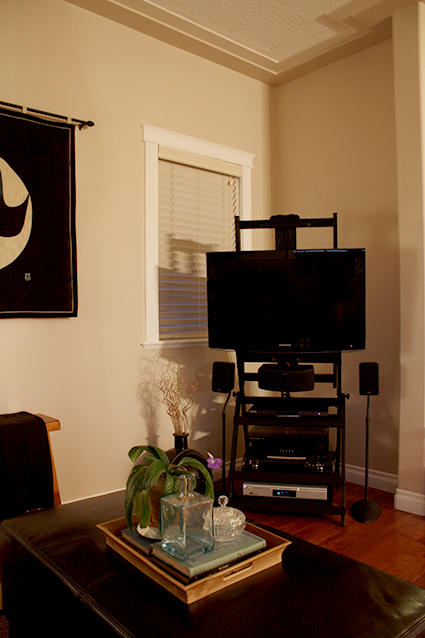 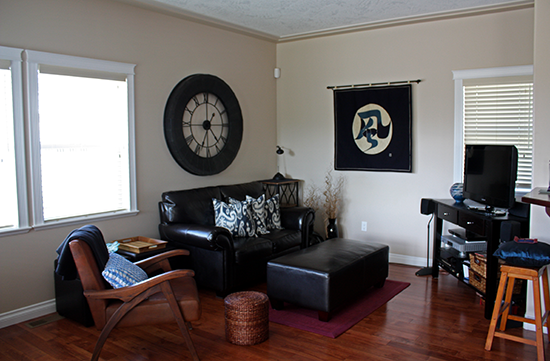 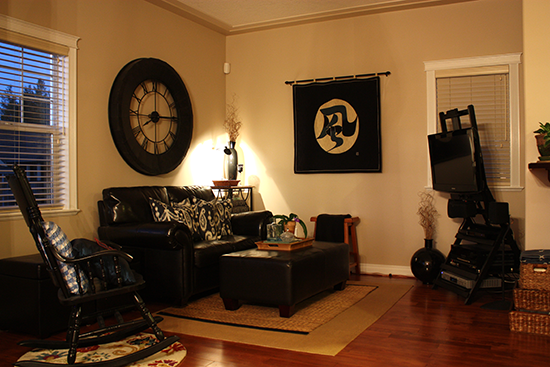 Well, I decided there was no comparison. I love the sculptural feel and uniqueness of the stand, and how compact the equipment is sitting on the stand. I like how the stand works with the clock, and the decor. But most of all, I like that the stand tucked perfectly into the corner… it’s such an awkward corner. Did you notice that?

This was a case of, if you can’t disguise the TV, then go all out with it instead!

I’m curious to hear what you think! And, I’d love your thoughts on the wall behind the TV, too. Would you put anything there, or leave that spot empty as is?

Today I’m linking up over at Primitive & Proper…

You might want to pop by to check out the other projects. Thanks for hosting, Cassie!

And thank you, my friends, for stopping by today 🙂

Like Loading...
It’s Labour Day & A Giveaway ~ We’re Celebrating Something Special With You!
Rainbows On the Floor

22 thoughts on “Artist Easel to TV Stand ‘Before & After’”