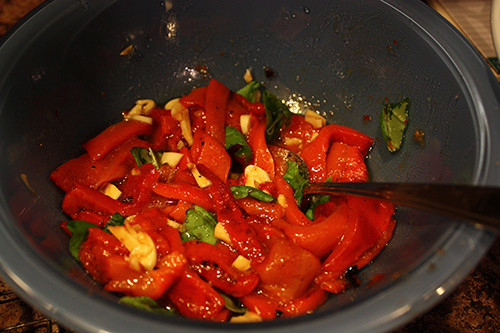 On the weekend we had some of our good friends in who also used to live on the Charlottes. It was so great to see them, and so much fun to prep a few finger foods and appies for everyone to enjoy.

We chose foods that were a little different from the every day, and that were festively colourful too.

So I thought I’d give you a little taste and tour 😉 Want to see what we did?

Eggplant for caponata, diced and ready to be sauteed… 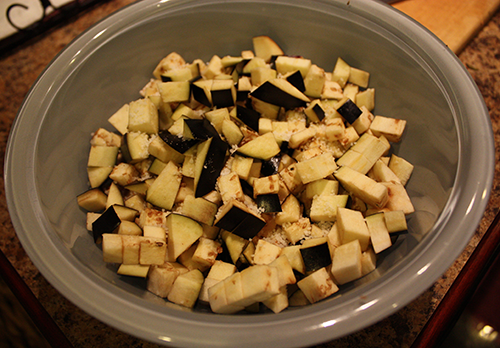 Caponata is a Sicilian dish made from chopped fried eggplant, olives, pine nuts, golden raisins, and various other ingredients. It is a type of salad that was historically served as a main course, but is now typically a side dish or appetizer.

With the eggplant sauteing, the bell peppers are prepped for roasting. 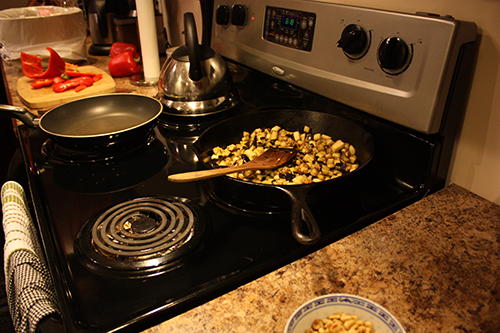 Do you see the red peppers in the background?

They will be be char-broiled, heavy on the char part! 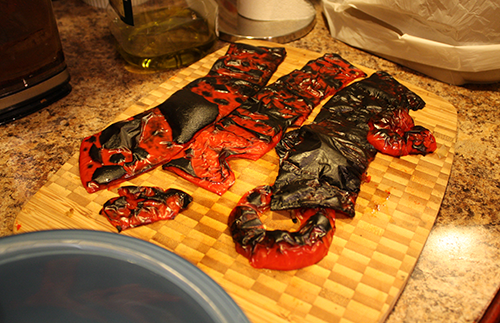 See what I mean? Do you ever roast red peppers? The BBQ is a great way to do this, but ours is tucked away for the winter.

Once the peppers are  charred like this, they have to be peeled. 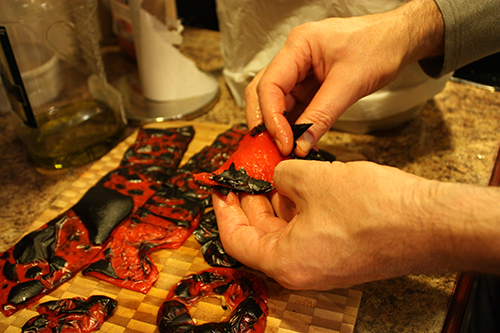 Did I have you going for a minute? Bet you were wondering who on earth eats this, weren’t you?

After the blackened skin is removed, this is what you end up with. 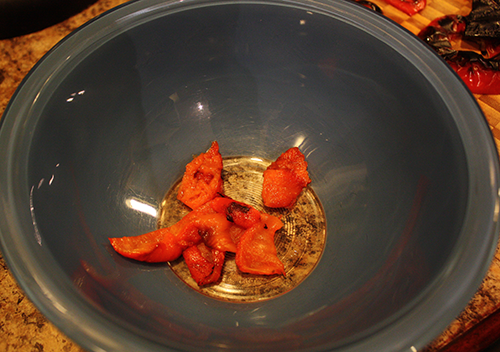 Toss the peppers in olive oil with fresh basil, chopped garlic, ground pepper, a little salt, and a splash of white wine vinegar.

Serve as a side dish, or as a topping on crostini.

Crostini, (meaning “little toasts” in Italian), is made using Italian or French baguettes, and is an appetizer of bite-size slices of grilled or toasted bread brushed in olive oil and herbs. It is served with assorted toppings, often cheese and meat, or vegetable toppings like these peppers. Crostini is a great appie with wine!

This is the finished caponata. 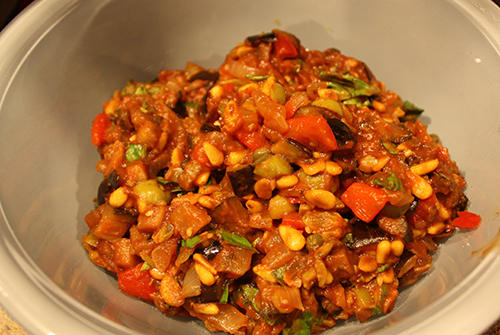 Can you see the pine nuts and olives? Do you recognize any of the other ingredients? It tastes a lot like antipasto spread.

And in the blender, a chickpea spread, very similar to humus was being made, also to be paired with the crostini. 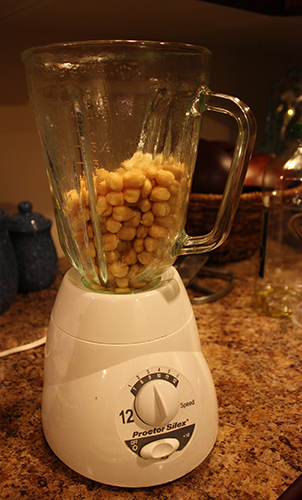 And to complete this little assortment, we included marinated mushrooms. They are best when marinated for 24 hours. 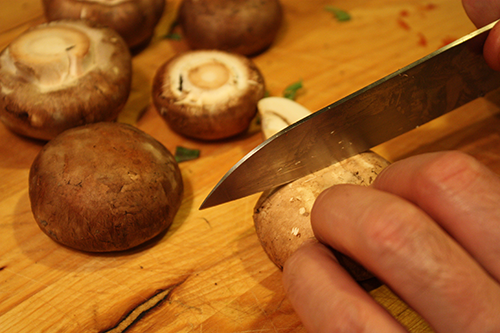 Hubby did all the chopping, slicing, and dicing… actually, he made all of these dishes so far 🙂 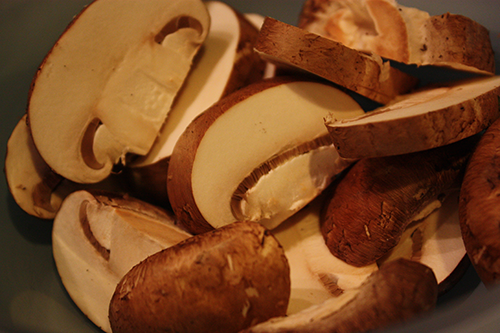 Notice that the mushrooms are sliced on the thicker side? That’s because you don’t want them to get too whimpy once they’ve been marinated! 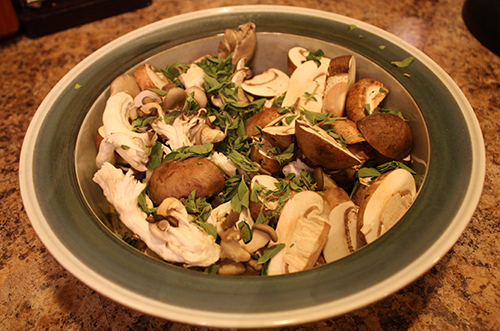 This dish is a mix of crimini and oyster mushrooms, tossed with olive oil, white wine vinegar and fresh oregano.

And here’s a little peek at all these things pulled together on the table. 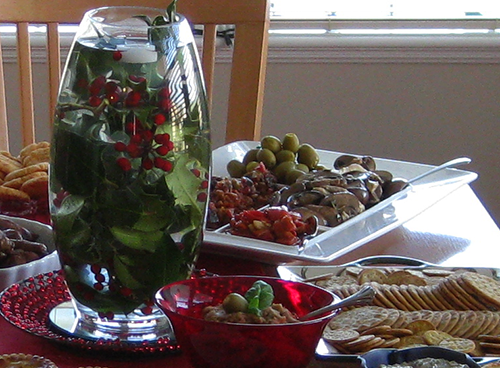 The chickpea spread is in the red dish, and the others are on the white serving tray along with garlic stuffed olives.

I actually did make a few things too! 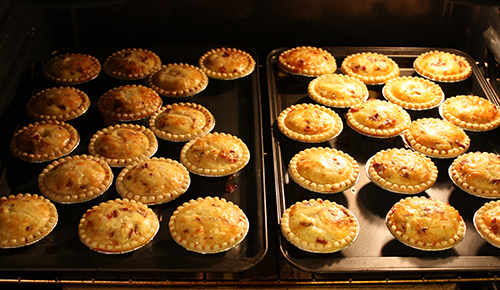 And served bite-size pieces of my brother’s smoked salmon, along with my all-time favorite cheddar cheese ball.

I like to include them with an appie buffet like this because they aren’t sweet, and actually have a hint of heat in the spicy way! 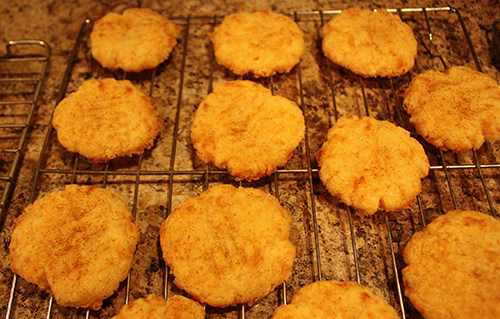 That’s paprika you see dusted on the top, but they do have cayenne in them, thus the spicy heat!

A new appie I tried were these cucumber feta rolls. 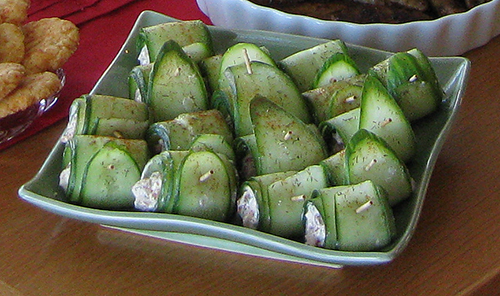 And they were inspired by my favorite stop for inspiration, Pinterest! The recipe is from Good Life Eats.

We had other savory goodies too… 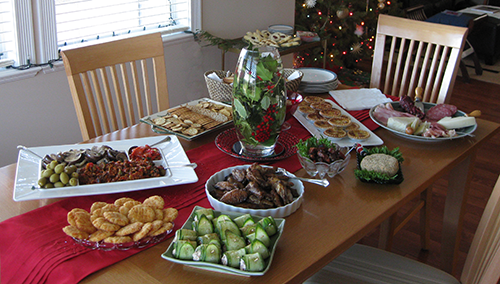 Like the meat and cheese platter, bocconcini balls, and hiding in the back is a spinach dip…

But of course you always have to have a little something sweet, and in our home, it wouldn’t be Christmas without shortbread cookies! 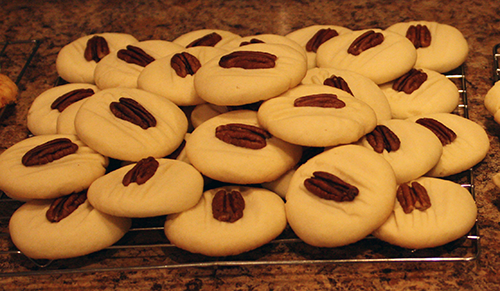 I used to top them with glazed cherries for the festive colour, but we’re not really keen on them, so I’ve switched to pecans instead. Mmmmm, love the taste of roasted pecans 🙂

And we also picked up some decadent delights from the new bakery in Duncan, Dolce. This is a link to their location if you’re interested in checking them out! 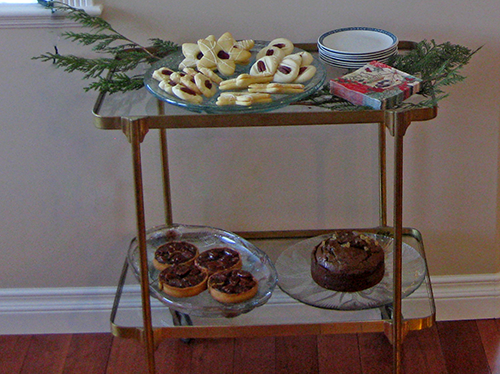 A quarter of the pecan tart is definitely plenty in one sitting. They’re rich and oh, so sinfully delicious!

So that’s a little taste and colourful tour of our appie prep for a day spent with long-time friends.

Do you have any favorites for gatherings like these?