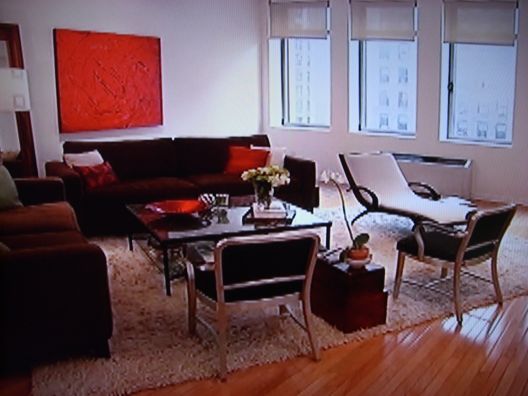 In today’s world of reduce, reuse, recyle, repurpose – so many ‘re’ words – what does it mean to you when you hear the word, redesign?

Depending on the professional you’re working with, redesign can take on many different meanings from a full-scale renovation to the reworking of a vignette, and everything in between. For me, redesign means to maximize what you already have in styling your space to create a look that’s fresh and new…  One of my favourite Home Stagers, Matthew Finlason says, “In an ever-evolving aesthetic trade, what is hot now is yesterday’s tomorrow.”

There is so much truth to Matthew’s statement, and it definitely works for staging, but where is the real value in taking that approach for your home? What about those special pieces you cherish, but which don’t fit into the current hot or trendy mould?

In HGTV’s ‘Selling New York’ Episode 8, designer legend Vicente Wolf transformed a space from, as he put it, “very boring, bland and static” to interesting, colourful and alive. What Mr. Wolf did was ‘stage’ this space for an evening gathering using apartment owner Mike Olson’s existing pieces – nothing borrowed, rented, or new, just the things that were already there.  This is staging for the ‘non-seller’, which is really redesign at its best!

Here is a ‘Before’ shot of the space:

Here you see the sofa, coffee table, audio table and area rug are squared to the room. The furniture is placed far apart, and snugged against the wall, including the lamp. The coffee table isn’t really anchored to anything in the space, and appears to be floating out in the middle of the nowhere. The chaise, even though angled into the space, actually draws the eye away from the core of the room to the white wall behind it. This room looks sparse, and cool. The hardwood floor, though it is warm and beautiful, actually detracts from the room in its current layout, because the visual lines of the flooring feed into the space feeling long and narrow. From this angle there is very little colour to greet you, and what colour there is gets lost because it has no impact – it’s too small, and is without context. Yes, very boring, bland, and static indeed.

And here is an ‘After’ shot of the same space!

Yes, this is the same room! To be fair, this image is shot from a different angle and the red artwork on the wall, which wasn’t captured in the first shot, definitely adds visual warmth and drama, but in spite of that, the changes that have been made create an amazing impact. It’s all about flow and focal points. Mr. Wolf has pulled everything away from the walls and angled them in to the room – did you notice that the area rug now sits at an angle to the hardwood strips? The seating has been pulled closer together and placed in a cozy conversational arrangement, and now the focus is towards the windows instead of away from them. Mr. Wolf pointed out that if you have windows, why would you have your back to them? Such a simple question, yet often overlooked.

And it is those simple things that are the essence of how redesign works. So many times all the pieces are there, they just need to be edited into ‘place’. Your home is collected over time, and that’s where your home finds its voice. And there is no ‘time’ in hot or trendy, just… here today, gone tomorrow. It’s in the things you hold dear that your stories are told. And it’s the stories that create that ‘feeling of home’.

If you haven’t seen Episode 8 of HGTV’s ‘Selling New York’, I recommend that you do. Click here to see what Vicente Wolf says about the episode himself, and the comments that viewers shared with him.

Photo Credit: ‘Before & After’ images courtesy of Curbed New York.

Wanting to reduce, reuse, recyle, repurpose your way to a redesign of your space? Not sure where to start? Maybe we can help. Contact us to schedule an introductory consultation – remember the first ½ hour is on the house!

4 thoughts on “ReDesign: Interior Styling Without Adding A Thing!”