Summer is definitely here – is anyone else melting?

This latest treasure find was just listed in Audrey Would! I am featuring it because it’s the perfect accessory for these crazy, hot days, and also because there is a little history behind the pattern name of the glasses. 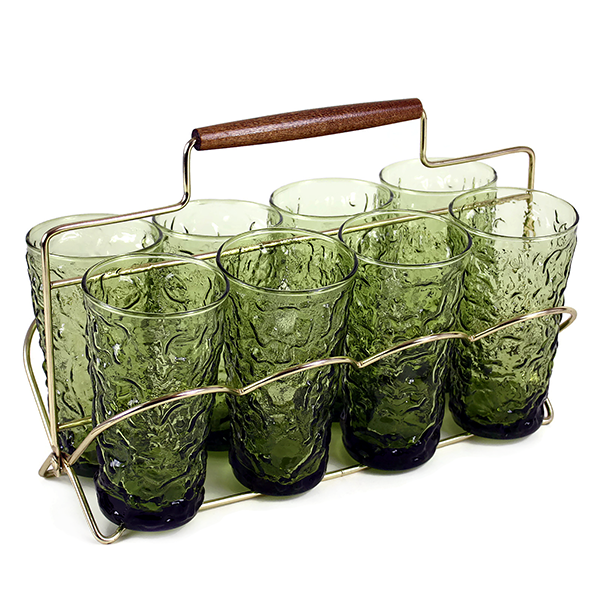 These glasses were made by Anchor Hocking in the mid-1960s. The pattern of this set is called Lido Glass, but the original pattern was introduced in 1959 as Milano Glass. Production of the Milano pattern spanned 1959 to 1963, and was only produced in Avocado Green and Crystal (clear).

Zanesville Mould Company, a new subsidiary of Anchor Hocking at the time, was assigned to making new Milano moulds to replace the old ones. As it turns out, the new moulds were quite different from the originals,  which resulted in the pattern name being changed to Lido Glass.

The two patterns are very similar, however the Milano pattern is more textured and the crinkle more defined. One way to tell a Lido piece from a Milano is that the Lido pattern does not extend right to the rim. Look closely at the glass below, and you will see a plain band around the rim where the pattern has stopped.

Lido Glass, like Milano, was produced in Avocado Green and Crystal, but it was also produced in Honey Gold, Spicy Brown, Aquamarine, and Laser Blue.

Crinkle glassware was popular at the time, and there were other companies producing their variation of this prevalent pattern trend as well. Morgantown Glass Company was one, but their Crinkle line has a distinctly different look. The tumblers are less uniform, and the crinkle is not as pronounced. In order to respect copyright, I could not share an image with you, but this link will take you to one. Seneca Glass Company with their Driftwood Casual line was another, see image here.

So you can see it’s not always easy to tell one crinkle glass from the next, but now you have a few more tips to at least tell Milano and Lido apart from one another!

You know what I love most about this Lido crinkle glass set? It’s easy… just grab your caddy and go!

20 thoughts on “Vintage Tumbler Caddy Set: All Crinkled Up!”